Tears of joy and happiness at Burnside’s Speech Night as students share their experiences, awards and dance performances with friends and family. We provided Lighting Programming and Operation for this event. Great fun for all involved, with parents thrilled to see their children up on the stage and involved. We have provided lighting for this event for several years. A showcase of student’s HSC Major Works in Visual Arts, Computing Studies and Industrial Technology.

The exterior front of each building is lit up in colour, as well as the interior – running on a large ArtNet network and power distribution system spanning 400m across the site. 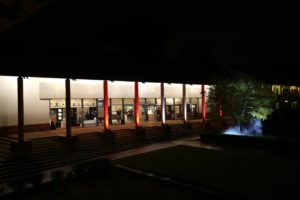 Each year, we provide a large custom lighting system for the Art Show, as well as exterior building and site lighting for the popular opening evening.

Each light used in the system requires DMX control and involves long cable runs along the roof and sides of the building. With the building made of thick sandstone, wireless is not a reliable option and so we continue to implement wired DMX each year in a carefully planned system and layout to reduce labour, cable and intrusions to the building – as it remains people’s homes for the duration of Bump In.

The building’s age means it is fragile and under careful care of their Archivist. There are no rigging options or modifications we can make, and hence a totally removable system whilst still being neat is required. We have developed a custom lighting system for the artworks that works with these requirements. Each year we provide a lighting package designed to the current year’s theme!

We provide general site lighting, themed lighting for student made displays each year, and some movement, colour and action for the dancing at the end! Provided themed lighting for an evening event. The venue transformed amazingly, with everybody involved thrilled with the outcome. A popular system installed on the Gowan Brae building for various events.

Showcases the architecture of the building, but also the possibilities of adding colour and movement depending on the occasion. Theatre production of “You Can’t Take It With You”.